Just wanted to let everyone know that we leave on Tuesday for FLORIDA!!!  Gracie will be having her fixator removed on Thursday.  We have Pre Op on Wednesday and will find out the time of the surgery then.  We are also counting down how many more times we have to do pin care.  I think that is one of the best parts of removal.  NO MORE PIN CARE!!  She already has all of her jeans laid out for when she gets home.  She is so ready for "regular clothes"!

Thanks to everyone for always keeping Gracie in your thoughts.  It really means the world to us.  We will keep you all posted on how everything goes.

to West Palm Beach.  For those of you that haven't heard.....last Tuesday during therapy we heard a noise during her knee bends.  Gracie said it hurt a little but then got up and walked to my car to go home.  We put her in the bed with ice but as the evening went on the pain just got worse.  So off we go to the emergency room.  After totally blowing the minds of the staff at the emergency room (umm no I have never seen anything like that before) and telling the xray tech exactly how to take the xrays, I sent the pictures to Dr. Paley and he called and told me her femur was broken!!  Fast forward thru the shock, panic and hours of crying (me and Gracie) and Wednesday morning first thing we are on a plane to Florida for emergency surgery.

After waiting most of the day in pre op they took her into the operating room at around 7pm.  They had to replace the 3 pins where her femur broke because they were all loose.  He added another pin to the side of her leg and one in the top of her thigh! (Picture above)  So much for her current wardrobe!  She stayed in the hospital until Friday evening and we came home on Saturday afternoon.  To say the least, it was quite a week! 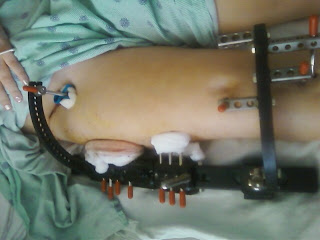 She has been home from school all week though we let her go for a few hours today.  She said she had to go...."it is crazy hair day mom"!  She is doing really good now that she is adjusting to her "new" fixator.  Bending at the waist is not quite as easy but she is a trooper.
And to my son,  you are the most amazing boy!  You have had to give up alot this summer and have not complained about being away from your family!  I was so thrilled to have you with me in Florida those 6 weeks and was heart broken to have to send you back home to go to school.  I thought that when we came home last month that I would not have to leave again until it was time for your sister's fixator to come off!  Who new.....I hated to leave you again last week but you took the news like a champ and did what you were supposed to do and told me not to worry!  I am so proud to be your mom!
Posted by Gracie at 10:33 AM 2 comments:

I think there should be a law that says any child with a fixator should be exempt from all other illnesses!!  Yesterday morning Gracie woke up at 2:15 am throwing up.  She continued until around 5 am.  Now usually when you have this issue you get up and run to the bathroom right?  Well not for poor Gracie.  She is not very quick these days unfortunately, so her dad and I were the trash can cleaners...YUCK!  It was so sad to see her try and situate herself in her bed to "take care of business".  She ended up missing therapy and school so she could lay around and feel icky :(

On a good note, I had a meeting at her school today to discuss her progress.  Happy to report she is already caught up and on track with the rest of the students in her class.  She is coping well and manages to stay all day even after going to therapy at 8am every morning.

We are trying to adjust to the fixator life combined with "regular life".  Paul and Tanner have been a huge help.  I don't know what I would do without him.  We have great friends and family that are offering help wherever we may need them.  We are truely blessed!

Now I just have to figure out where to put all of the stuff we accumulated in Florida.  I think Gracie managed to aquire a whole new wardrobe.  My house looks like a tornado went throught it and I hope to restore it eventually to its normal lived in look.
Posted by Gracie at 7:39 PM 1 comment:

Okay so this is my first attempt at blogging and not so sure I will be good at it.  I got this idea from a dear friend and fellow fixator mom!!  That is your shout out Jamie.  I wish I would have done this at the beginning of Gracie's surgery but oh well.  There is no time like the present.  I am posting some pics of Gracie's journey over the last few months.  Just to keep you updated.....Gracie is now finished with the lengthening process and gained over 3.25 inches!  She looks so great.  Right now she is still wearing her fixator during the consolidation phase (bone hardening).  We are so happy to be home but miss all of our friends that we made during our stay in West Palm Beach.  Most of them are home now too!  We will continue therapy here at home until it is time for the removal which should be in about 2 - 3 months.  She is attending school and just trying to keep up everyday.  She has therapy at 8am every morning and then goes straight to school.  By the time she gets home she is exhausted.  She is such a trooper and we are so proud of her.  Tanner is super happy to have his mom and sister home full time now.  He told me he was tired of talking to me on the phone and could I just hurry up and get here.  Paul has even managed to be here with us for our first full week home.  Thanks to everyone who sent Gracie presents and for keeping us in your thoughts!!
Posted by Gracie at 7:51 PM 1 comment: 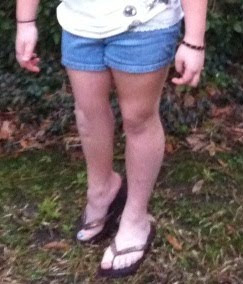 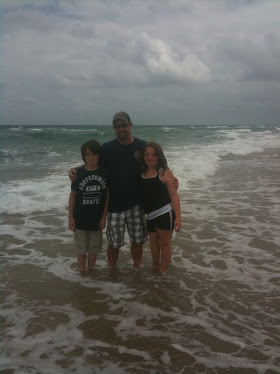 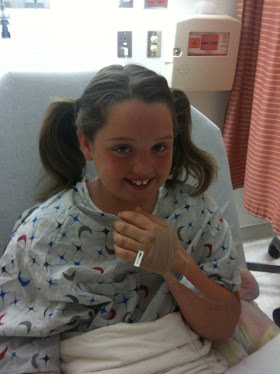 Getting ready to go to the operating room 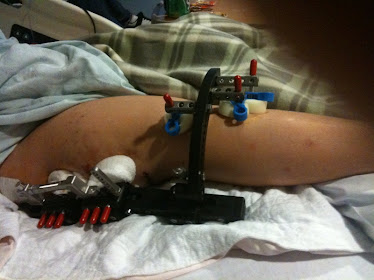 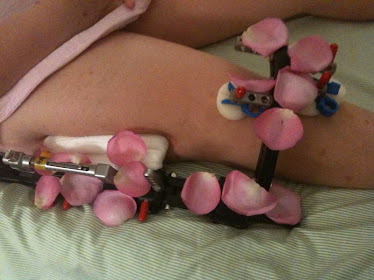 My hardware with rose petals

A Must Have Therapy Tool 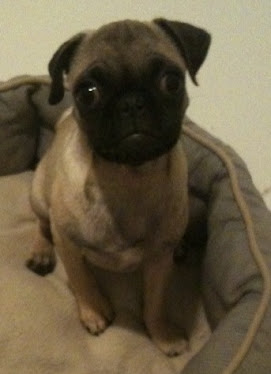 Gracie
My name is Gracie and I am 10 years old. I just finished my second limb lengthening and my leg grew over 3 inches. Dr. Paley has been my doctor since I was about 9 months old. He helps other people like me at his hospital in West Palm Beach, Florida.

Just after he told us we could go home!!!

Before my first surgery